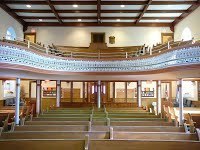 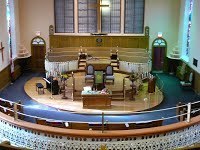 It was in the conference year of 1853-54 of the Wesleyan Methodist Church of Canada that Rev. Edward Sallows came to the new settlement of Collingwood Harbour.  The first service was held in August of 1853 at the home of Mr. George Cathie, at the foot of Pine Street.

In 1854-55 services were held in a larger house erected by the Missionary.  The land for the first Methodist Church in Collingwood was given to the Congregation by B.W. Smith. The church was built in 1858. It burned on June 14, 1863.

On September 30, 1863 the cornerstone was laid for our present Church.  The building was refurbished during 1893-95 with the following improvements: a Sunday School building, a pipe organ, new lights and windows, as well as, new seats.

After Church Union in 1925 a larger Church School was needed and in 1930 a new building was dedicated.  On September 18, 1930 the present organ was dedicated.  The monies donated by Harry and Fred White in honour of their parents, Mr. and Mrs. W.H. White made it possible for the purchase of this organ.  We are indebted to Captain and Mrs. F.A. Bassett for the addition of the chimes.

Renovations to the Sunday School building were undertaken in 1958 and in addition on November 15, 1958 the cornerstone was laid for a large Christian Education Building, later name Hunter Hall, in honour of the Rev. John E. Hunter, Minister of Trinity United at the time.

Through the ongoing efforts of dedicated, caring Ministry and the commitment and leadership of Trinity's own Congregation, our Church continues to project a strong Christian presence within our own community.

Memorials and Dedications in the Sanctuary

The congregation is indeed, grateful for these and any other gifts which have been given in memory of faithful members. Many bequests and gifts of money have also been received.

The following gifts and memorials have been presented to the Church: